Alison Farrell and I had the great honor and privilege of interviewing one of our book making heroes, Kitty Crowther for the latest Bulletin. We hope you love it as much as we do!

Kitty is published in English by Enchanted Lion Book and Gecko Press!

How do stories begin? Why are they alive? Floating in the huge web of knowledge between the earth and the clouds. Certain stories seem to never die. Maybe it’s because of our endless quest of trying to understand the wild and incredible mechanics of life.

I’m fascinated by the creation process. But at the same time, I don’t want to fully understand it; it could spoil the magic. It would be impossible to put a theory of the process of creation into a jar. We make new discoveries every day about how the brain works.

One of my missions with the books I make is to agree that I don’t understand everything. I think I’d be the worst person to analyse it. I’m not necessarily a rational person; I believe in anything that I don’t see. I’m half English and half Swedish, and I grew up believing in fairies, goblins, trolls, the green man, giants, witches, and all the gods and goddesses (I once tried to count them in Japan, but I lost track!) in this unique world.

I saw a film with Micheal Caine and Harvey Keitel called ‘Youth’. Keitel’s character is a film maker, and he says to Caine’s character: “I have to believe in everything, otherwise how could I make things up?” (something like that). So to create, or to serve (I will come back to this), you have to believe in your characters as if they’re really alive. I still very strongly remember as a little girl, while reading the amazing and beloved Beatrix Potter, I really thought these characters lived somewhere in England. And that one day I would visit them for tea!

I think imagination is the strongest muscle of your brain. How to see or reach out of the box. And to exercise that muscle, we need to keep reading stories (on paper, not screens, sorry).

My book ‘Stories of the Night’ was born in the dream of a dear friend, Sara Donati. Sara came to my house for a few days, with two other girls; we decided to do a small residency. One morning she woke up and said, “Kitty, I dreamt that you were making a pink book, and you wrote the title ‘Short Stories of the Night’ in you own handwriting on the cover.”

It had been years that I’d wanted to write the letters on the book covers myself; I always admire people who do that. So as a joke, I did this very first cover design in my sketchbook (see photo).

It had also been a very long while that I’d wanted to do a book with bears. I’m fascinated by nature; we have so much to learn from it. Since forever in stories, we’ve made animals talk as if they were humans. So in ‘Stories of the Night’, I thought it would be fun to make the animals behave like humans and the humans are living in the forest like animals. The borders are not so clear. Like in real life.

I made this book with the Swedish publishing house Lilla Piratförlaget, with the publisher Erik Titusson, my very good friend. I originally wrote the story in French, and then my partner Sam McCullen (the one who runs this fantastic blog called Picturebook Makers – blog.picturebookmakers.com) helped me to write it in English. Then the amazing Swedish writer Ulf Stark translated the English text into Swedish. Sadly, Ulf died two years ago. I illustrated his very last book ‘The Runaways’. Both ‘Stories of the Night’ and ‘The Runaways’ have been published in English by Gecko Press.

I grew up with the wonderful ‘Little Bear’ books by Maurice Sendak. His bears are incredible. One of the hardest things to do in a children’s book is – believe it or not – tenderness. Real tenderness. It’s not because you draw a heart, flowers, kittens, and some kisses that it would be tender. it’s very subtle. As a bad-hearing person (born almost half deaf; I only had hearing aids from six years-old), I spend a lot of time observing, and trying to figure out what the hell is going on. And I have always been fascinated by the space between two living things (even trees, plants, clouds). You can also draw with the negative space.

One of my heroes is Arnold Lobel. His Porculus is a yellow pig. So for ‘Stories of the Night’, I thought I could certainly make my bears green. Maybe they slept too long, and some moss climbed over them.

So why three stories in this book (the little bear demands three stories: please, please, please)? I do like the number three. It’s a powerful number that you find infinitely repeated. Three is a sacred number in many religions; in fairy tales, it’s often a magical number. It represents so many different, important things like: past, present, future; beginning, middle, end; birth, life, death; mother, father, child. I thought it would be great to follow three characters who are struggling to sleep.

I always work in sketchbooks. As it’s already a book, straight away you have this amazing dynamic of turning pages. It’s always a surprise: what is revealed on the next page.

The first character in ‘Stories of the Night’ came very easily. She’s called Night Guardian, and she’s been with me for a while. She’s like an old friend. I’m fascinated by hermits who know the language of the plants and animals. I love drawing old people’s faces. like a map with walks: happy ones and sad ones.

The second character is this tiny girl Zhora (like Zorro!). I think it’s really important to show girls as strong characters. To show to them that they can fight back if they’re in danger. We are the only species that kills our females (too many women die at the hands of their husbands or partners, beating them to death). I can’t even understand how this is possible. It’s time to tell them, to girls, that you are strong. And powerful.

I strongly believe that I couldn’t have done all these books if all the other wonderful illustrators and writers hadn’t existed before me. It’s amazing to see things that pop up in my books from my childhood. I didn’t invent Zhora; she’s the descendant of a character by the wonderful Swedish illustrator Elsa Beskow. I had four or five books by her as a child; I didn’t understand a word of them, but I spent a long time looking at the drawings. I only realised the impact of Elsa Beskow on me much later.

The third character is Bo, a middle-aged grumpy man. He’s an insomniac. I like to think of him as a scared man, because he lives in his big fur coat, never taking it off. His best friend understands this, and advises him to go for a swim with his coat on. Then he’d have to go to sleep without the coat because it’s soaking wet.

I think like many writers and authors and illustrators (I never know which word to use to describe someone who does it all), once the character takes shape, it’s almost as if he or she is leading the way. And I have this feeling that I’m serving the story that is taking place under my very own eyes. Now how lucky is that!

Finn's Feather featured on the Marginalian! 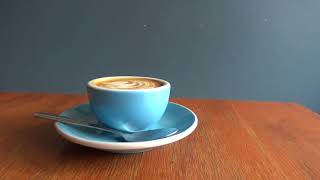 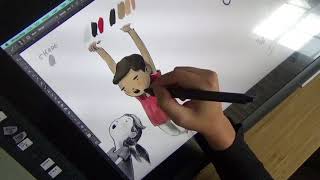 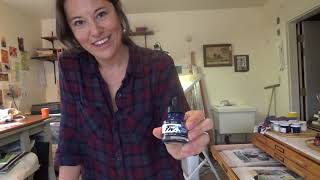